There are three boat trips operating from Benidorm all departing from the port by the Parque de Elche in the old town.  A Mini Cruise to Calpe, a day trip to the Island of Tabarca and a trip to Benidorm Island with underwater views.

Tabarca is the only inhabited island on the Costa Blanca with approximately 59 inhabitants.  Located just 2,35 nautical miles from the Cape of Santa Pola in Alicante, the island measures approximately 5,741 feet in length and 984 feet wide.

There are two option to choose from:  the trip to Tabarca with free time on the island or the second option Tabarca and Alicante, with 2 hours and 15 minutes in Tabarca  and 3 hours in Alicante.
Once on the island there is free time to explore or to soak up the sun and relax.
The boat trip operates from Easter until the end of October, journey time from Benidorm is approximately one hour and 15 minutes each way.

The Mini Cruise to Calpe operates all year round.  There is generally a short break for maintenance in the winter, the dates of which are always announced on our web site.   The cruise departs from the port and cruises along the coast line passing the impressive cliffs of the Sierra Helada.

Along the route look out for the 17th Century Watch Tower, La Torre de les Caletes which played an important role in protecting the Benidorm Coast line from Berber Pirate attacks.  At the end of the Sierra Helada Mountain in Albir you will see the Lighthouse, constructed in 1863 protecting all mariners from the perils of the Sierra Helada.
The majestic Peñon de Ifach comes into view, Symbol of the Costa Blanca, a Nature Reserve and used as a navigational landmark it indicates the approach to Calpe and the end of your one hour cruise along the coast. 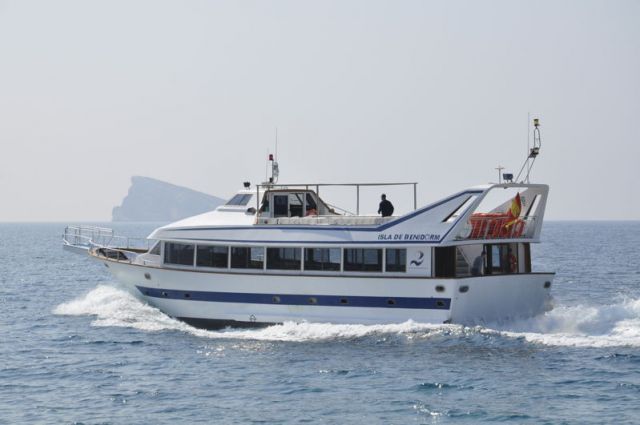 You disembark in Calpe port, an important fishing port on the Costa Blanca and have approximate 3 and a half hours until the return journey to explore at your leisure.  In the port you will see a multitude of fish and shellfish restaurants displaying platters of fish and offering sangria to bring in the customers and other restaurants at the end of the port offering the freshest fish and delicious paellas.  The fish market auctions the days catch to supermarket chains and restaurants and if open you can watch the auctions live from a gallery above the auction hall or stroll to the end of the port to the Calpe Nautical Club.
If you are adventurous hike to the top of the Peñon (approximately 2 and a half hours) or take the Tourist Train from the stop by the restaurant Restaurant Baydal on one of its many routes to the main tourist attractions;  the Historic Old Town , the salt lakes where migrating flamingos stop , the Queen’s Baths an ancient fish farm that salted and exported fish and Garum fish paste, the History and Archaeology Museum, the Collectors Museum and the Contemporary Art Gallery or the various beaches in Calpe.
The nearest beach in walking distance is just the other side of the Peñon and can be reached by walking up the hill under the bridge then turn right at the very top.

Last but by no means least is the trip to Benidorm Island.  Just a 20 minute trip from the port in the old town, the boat also stops to pick up from the platform in the Rincon de Loix during high season.   Once on the island, the views of Benidorm are impressive, both beaches, the Poniente and the Levante can be seen as can the small Mal Pas beach to the side of the Castle.
Two boats make the trips backwards and forwards , the Aquarium and the Isla de Benidorm.  If you make the journey on the Aquarium once you arrive at the island the boat will cruise slowly by the island so you can see the sea bed and the fish and beds of poseidonia.   Access to  the viewing area is down a spiral staircase to the lower deck. 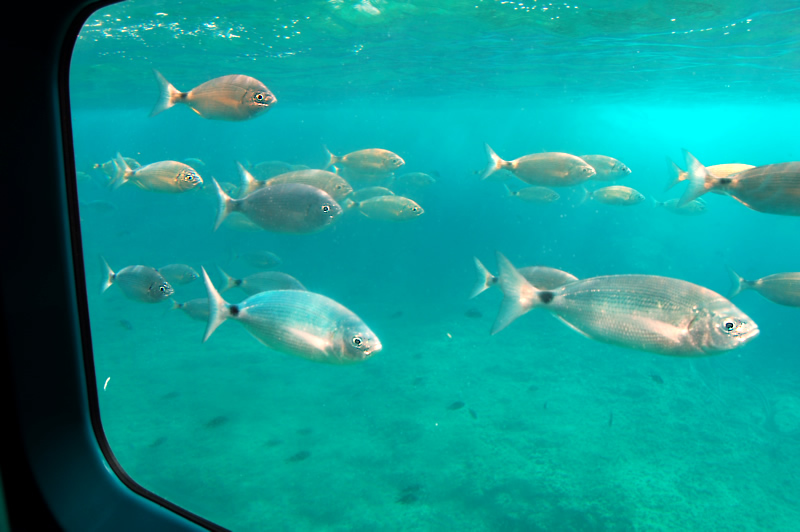 If you make the journey on the Isla de Benidorm then you will have to change to the yellow Aquascope once on the island to see the underwater views (included in the price).
You can stay as long as you like on the island, returning on any of the boats that depart hourly.   The first boat departs at 10:00 am and the last departure depends on season and weather conditions.  The last boat does not give you time to explore the island.

Tickets are on sale from our Web Site.

Purchase tickets to Benidorm Island with underwater views.             Watch Video of the excursion.